The duplicity of the PPP regarding GECOM ethnic makeup 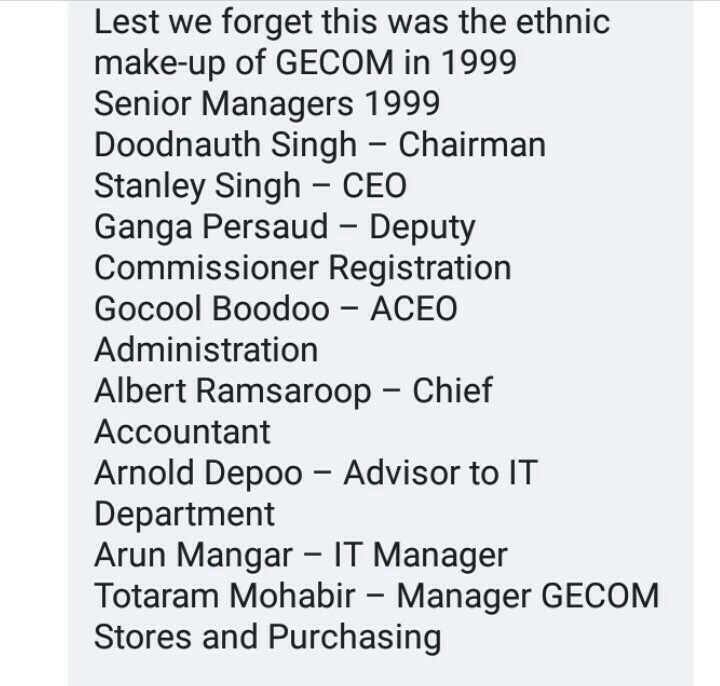 Reference is made to a very acerbic letter from Mr Anil Nandalall continuing the very dangerous racial rhetoric about the staff make-up of the Guyana Elections Commission.

Mr Nandalall like so many of his other colleagues conveniently speaks about matters like these, but it can be expected from a party whose leader is currently before the court on a charge of race-baiting.

Arnold Depoo – Advisor to IT Department

What is instructive is that Doodnauth Singh later became the Attorney General under the PPP administration; Ganga Persaud served in several ministerial capacities; Arun Mangar became a PPP Commissioner and Gocool Boodoo was a Special Advisor on Local Government. Imagine after holding the office of Chief Elections Officer for so many years, right after his exit it was disclosed that it was Boodoo whose miscalculations in the 2006 elections cost the Alliance For Change a seat and also, he was about to repeat the feat in 2011 when Vincent Alexander nabbed him.

Guyanese must also take notice that the PPP today has turned to two Afro-Guyanese, Robeson Benn and Dr. Roger Luncheon to speak out against the so-called African dominance at GECOM. It was the same Dr. Luncheon who went to the High Court and proclaimed that no Afro-Guyanese was qualified to be an ambassador under the PPP, at a time when there was none serving in our overseas missions.

Could Commissioner Benn inform this nation, if any member of this present administration’s son or daughter was ever employed by GECOM? For the records former Minister Carolyn Burkett Rodrigues son worked in the I.D Card Production Department during the 2006 Regional and General Elections. So Commissioner Benn, if you are a fan of American actor Anthony Quinn, DON’T CROSS 110th STREET.